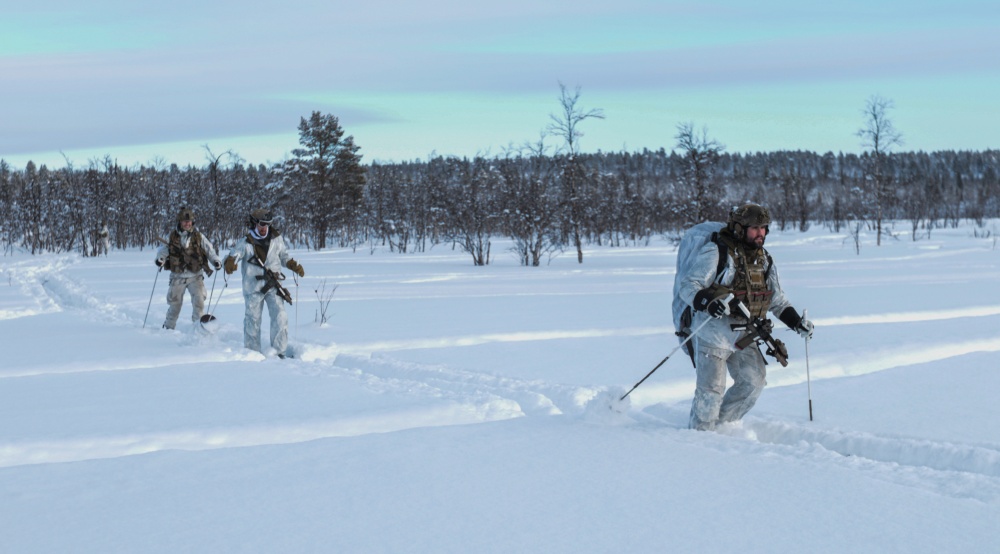 “A Turmoil of Shadows”

Purpose
SOFWERX, in collaboration with the USSOCOM J5 Donovan Strategy and Innovation Group, will host a Disruptive Speaker Series, led by Dr. Lilian Alessa, entitled, “A Turmoil of Shadows: The Hidden Facets of Arctic Threats and the Role of USSOCOM in Ensuring Stability.” The presentation will address the roles that the SOF Enterprise, as a force multiplier, could be responsible for in the emerging Arctic operational environment. While SOF maintains a standard of being able to operate in any conditions anywhere in the world, the Arctic is emerging as a more nuanced and complex theater.

Speaker Background
Dr. Lilian Alessa “Doc” is President’s Professor at the University of Idaho and Director of the Center for Resilient Communities (CRC) and has published over 150 peer-reviewed papers on systems science. She has previously served as a Defense Intelligence Senior Level (DISL)-equivalent Special Advisor to the Department of Defense (DOD) and is currently serving as a Senior Advisor to DOD. Additionally, she served as Deputy Chief of Global Strategies with the Department of Homeland Security (DHS), Office of Strategy, Policy, and Plans. She has over 25 years of Arctic experience working with Academic, Federal, State, Local, Tribal, and Territorial partners (FSLTTP) across Canada and the U.S., focused on the resilience of systems, people, and communities. An internationally recognized expert in Arctic resilience, early warning systems, and special operations, she sits on several national committees and has led the development of two joint Canada-U.S. Arctic resilience toolbox assessments: The Arctic Water Resources Vulnerability Index (AWRVI) and the Arctic Adaptation Exchange Portal (AAEP). She has served on the Board of Directors for the Arctic Research Consortium of the US (ARCUS) and is part of the Interagency Arctic Research Policy Committee (IARPC).

She has developed strategic intelligence frameworks and tools that have been adopted by components and commands within DHS and DOD, led human dynamics components for a range of DOD emerging threats and capabilities programs, and has published six data fusion products focused on critical resources for ensuring security in the Arctic. She is one of the Co-Founders for the Community of Modeling in Social Ecological Systems (COMSES), hosted out of Arizona State University, which now reaches globally and connects thousands of cutting-edge modelers. Among her extensive roles, she has been an Advisor for the Director of the National Science Foundation and the National Ecological Observatory Network. She is a member of a National Academies of Sciences, Engineering, and Medicine (NASEM) committee, studying the future of research and technology for the intelligence community. She currently works across the U.S. interagency, providing subject matter expertise on issues related to defense and security resilience in the context of the Peoples’ Republic of China and the Russian Federation, with an emphasis on the circumpolar Arctic.

Overview
The Arctic is an emerging theater fraught with diverse, and often conflicting, views of its role in homeland defense—ranging from the scope of environmental and climate change to the way the U.S conducts war games with accuracy and impact. DOD assesses the immediate prospect of conflict in the Arctic as low. However, the need to assess evolving Arctic security environment risks is critical to ensuring defense of the homeland. To accomplish this, a more precise threat landscape is needed, one that incorporates a rising Peoples’ Republic of China (PRC) and an ever-present Russian Federation (RF), whose arctic identity cannot be ignored. Ultimately, DOD seeks a secure and stable Arctic in which U.S. national security interests are safeguarded, with cooperation with allies and partners at the cornerstone of DOD’s strategic approach. The role(s) of SOF is often relegated to that of tactical training in extreme environments; but as the complicated threat landscape of the Arctic becomes more clear, so does the need for the SOF enterprise to more broadly apply its breadth and depth of skills to ensure the Joint Force can sustain a global competitive advantage in that space. If the U.S. asserts that key elements of Arctic competition lie with the presence and activities of the PRC and RF, then the roles of the SOF enterprise are yet unwritten. During this talk, Dr. Alessa will explore the unclassified logic of how USSOCOM could rapidly add value to ensuring that homeland defense is adaptive, resilient, and cooperative.

*Agenda is subject to change